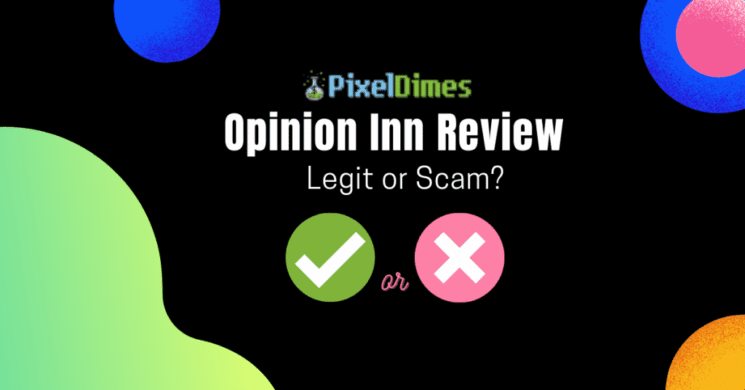 What is Opinion Inn?

Opinion Inn is another market research agency that is looking for opinions and feedback in the form of surveys.

Hence they pay to those workers you can provide relevant survey and feedback and opinion based on a certain subject.

Opinion Inn is based in Chicago, USA, and has been in operations since 2010. They have over 150,000 visitors to their site to date.

Basically, Opinion Inn has many clients that require second opinions or feedbacks so they hire users who can help in surveys and provide some adequate feedback.

Now let’s take a look at how you can get started.

Opinion Inn is a global website so anyone can join the site. However, users must be over 18 years old to start earning from the site.

Despite the site being globally available, the high-paying survey sites are based on locations.

Most citizens from the USA, UK, Canada, and India get the most high-paying surveys.

When signing up you will get a $10 sign-up bonus which is very high comparing other sites.

You will have to fill up your personal information such as Full Name, Address, Email Address, Phone number, Country, and also your Paypal account.

Then the site will send you an activation link which you have to activate in order to access your dashboard.

How To Work on Opinion Inn?

There is a limited amount of work available on the survey site Opinion Inn. Unlike GPT and PTC sites you can only earn from some activities.

Now, let’s take a look at two of the earning opportunities in Opinion Inn in detail:

They are the main source of income on the Opinion Inn site. As the site is another survey site so it is understandable that you can only earn some money by answering paid surveys.

After logging in to the site there are already tons of surveys that are available on the site.

You can also view the exact amount already accumulated on each survey which you will earn after each completion of those surveys.

Once you reach the dashboard you have to click the Take Survey button. Then you have to answer some qualification questions.

Fill in all the demographics related to the survey which will qualify you to answer those surveys.

If you are qualified to answer you will be forwarded to the paid section of the surveys if not you will have to move on to the next survey.

You won’t get paid just for answering the qualifying question on the Opinion Inn site.

After completion of surveys, you won’t always get surveys available on the site so you will need to be alert in the email for survey invites.

You can also some more earnings from the awesome site Survey To Earn. Check out Survey to Earn Review here.

Polls are types of contests that you can provide short answers to any questions available.

These are very fun games and quizzes to participate in which act like surveys but will only take up to 10 seconds to complete the polls.

Actually previously Opinion Inn had the referrals instead of polls but later they removed the referrals and now you can earn some low side income from Polls.

How Much Can You Earn from Opinion Inn?

The level of earnings depends on how many surveys are available and how much can you answer surveys in one day.

Particularly, you may earn from $2 to $6 per survey. However, most of the survey tasks are based on location in Opinion Inn.

So you may not always get the surveys and have to rely on survey alerts most of the time.

It may also take up to 6 weeks for the site to approve your surveys until then the status will show as Pending.

Once approved you will receive your earnings within 48 hours. In some rare cases, you can even earn $100 per survey.

It will take a lot of effort, time, and patience for you to earn some decent side earnings.

If you want to earn earnings from just answering surveys then check our Survey Anyplace review.

You will have to earn at least $25 to withdraw your earnings. However, you will get a $10 as a signing up bonus so you can earn an extra $15 to withdraw.

But since the earning potential of the site is limited these $15 also will take lots of time and patience.

Pros and Cons of Opinion Inn

Opinion Inn is an interesting site with many positive sides and some negative aspects.

It is a legit website that pays its users but some patience is necessary to earn some decent earnings.

Almost 78 users from Trustpilot site has rated Opinion Inn 4 star out of 5 which indicates the users feel the site is really nice and are satisfies with it.

Now let’s take a look at some User Reviews from the Trustpilot site.

Here are some positive reviews.

According to this user first, he lost $11 but after asking for support and explanation he received the support, explanation, and he gained $11 as well. 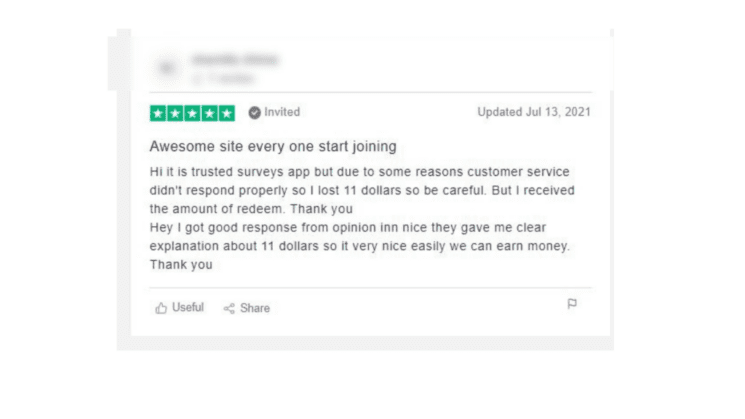 This user is very honest and says the site is legit and it pays a decent amount. He also points out the site takes some time to review the survey. 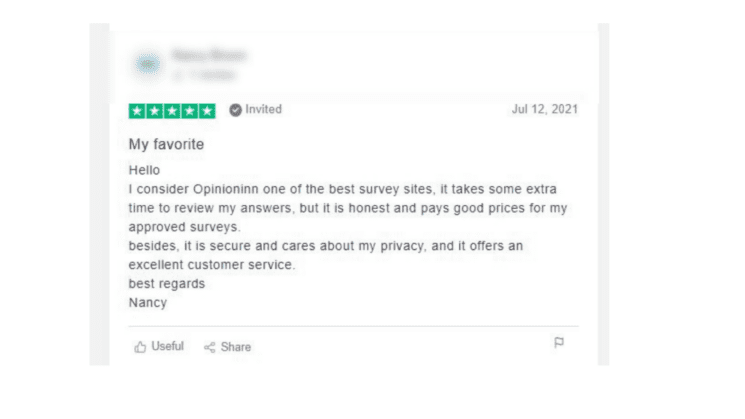 According to this user, he is new on the site and has started earning. He also could cash out his first earnings without any problem so he loves the site. 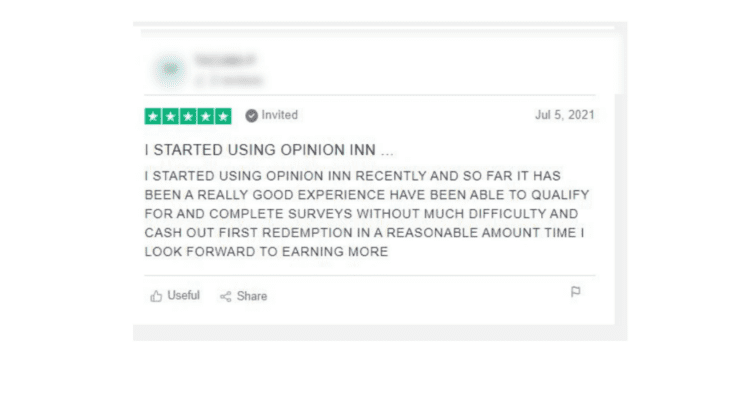 Now let’s take a look at some negative reviews of Opinion Inn.

According to this user, the site is a fraud and bans the users when they earn some money. However, the representative from the site has claimed he can show the exact reason why the user was banned. 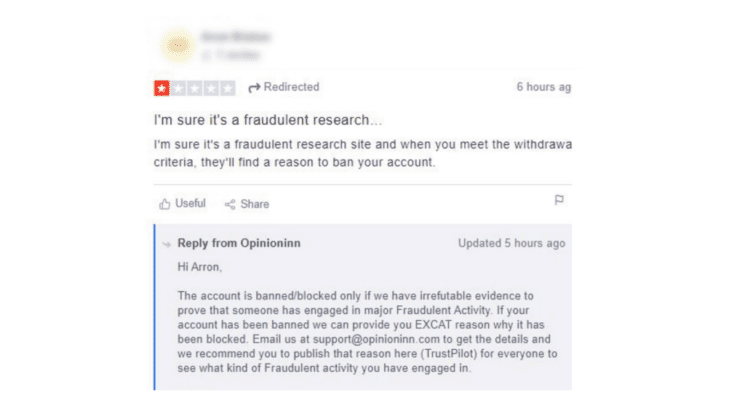 This user also claims his account was banned for suspicion of using multiple accounts but he can guarantee he only used one account so was falsely banned. 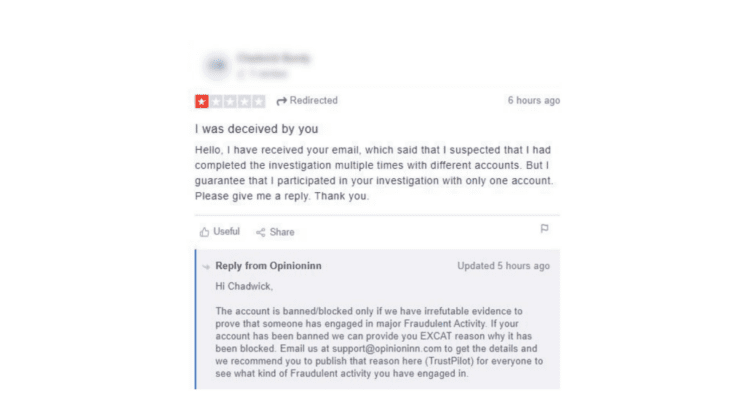 According to this user, he was also banned by the site after reaching his withdrawn account. 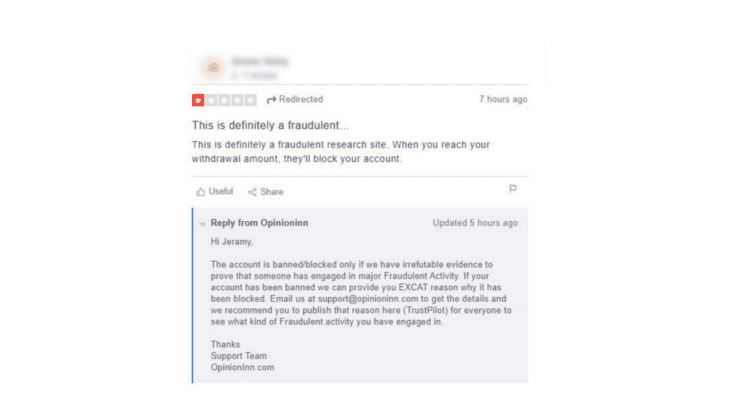 The site is very popular and legit according to the majority of the users. However, some are not satisfied with being banned without explanation.

But the key point is site will pay well once you remain patient and complete all the surveys authentically without breaking any survey policies.